The Changing Height of Mount Cook

On 14th  December 1991 a massive rock avalanche occurred from the East Face of Aoraki /Mount Cook, sending an estimated 14 million cubic metres of rock in a 1.5 kilometre wide cascade across the grand plateau and down onto the Tasman Glacier. It is thought that the avalanche travelled at speeds of 400 to 600 km per hour, and the resulting seismic recording at Twizel, 75 km away, lasted well over a minute, registering the equivalent of a magnitude 3.9 earthquake.

Prior to the avalanche the surveyed height of New Zealand's highest peak was 3764m. The Department of Survey and Land Information (now LINZ) calculated that this was reduced by 10 metres after the summit fell off with the rock fall.

As you can see from the photo, the peak became extremely narrow and unstable. In the image taken by GNS geomorphologist Mauri McSaveney a few days after the event. A lone climber that can be seen as a tiny dot inside the red circle  gives some idea of the scale. The "new" summit was obviously highly unstable, and would be subject to quite rapid erosion following the rockfall.

Since 1991, there has been no re-calculation of the revised elevation of 3754m until recently. 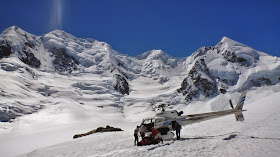 At the end of November 2013, I flew up to Plateau Hut with a climbing team who planned to take direct GPS measurements of the summit ridge of the mountain, a short distance from and a few metres below the highest point. The measurement would then be used to validate a computer model made from recent aerial photos to give a precise calculation of the present height of the peak itself. 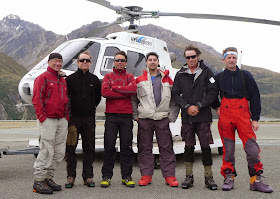 The team was made up of (left to right): Geoff Wayatt, mountain guide; Nicolas Cullen from Otago University; Brian Weedon, mountain guide; Pascal Sirguey (project leader) from the National School of Surveying at the University of Otago; Jim Anderson from Survey Waitaki and myself. Geoff, Brian, Nicolas and Jim made up the climbing team.

GNS Science provided support in terms of the helicopter flights.  I was able to accompany the team to Plateau Hut where I spent two days gathering a visual record whilst they were involved in their climb.

The plateau of Mount Cook is arguably the most spectacular alpine setting in New Zealand. This image shows the 1500m high East Face of Mount Cook in the early morning light seen from Plateau Hut. The normal route up the mountain follows the Linda Glacier, starting on the right hand side of the image and following into the shadow behind the long low angled rock ridge (Bowie Ridge) up to the summit rocks. 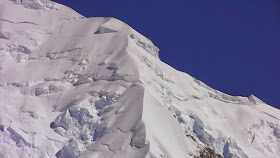 As well as Mount Cook itself, the Grand Plateau has views of many other summits along the main divide, including Silberhorn, Tasman and Dixon. This image shows the top section of Syme Ridge on Mount Tasman. There are three climbers just visible on the ridge just above the centre of the photo, about 10 hours into their climb from the hut. 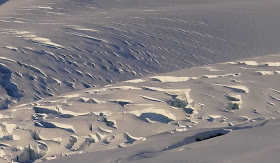 This image shows the patterns of crevasses on the grand plateau, just above the Hochstetter Icefall.


The climbing party left Plateau Hut just after midnight with clear, cold weather conditions that were perfect for the climb.


Aoraki / Mount Cook is a challenging peak to climb, with very dynamic glaciers and steep rock and ice faces to negotiate. In this photo, the climbers are in the ice gullies that run through the summit rocks.


View from the summit, with Mount Tasman in the background


Looking along the summit ridge of Aoraki / Mount Cook, with the two GPS units in place. The very highest point is about 45 metres distant. The GPS units measured a height of 3719 metres at their position. This measurement was consistent with the height from the computer model which then allowed the height of the high peak to be calculated as 3724 metres above mean sea level. 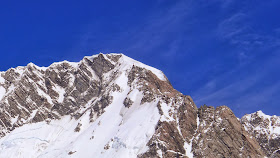 This means that Aoraki / Mount Cook is a full 30 metres lower than the 1991 estimate of its height, showing that the mountain peak has continued to erode significantly during the last 22 years.


There is more information about the project at the Otago University School of Surveying website.

Here is our video of the expedition :


Mountaineers staying at Plateau Hut can get an incredible 360 view of the surroundings from nearby glacier dome. We have even created a GeoTrip for the location:  www.geotrips.org.nz/trip.html?id=450